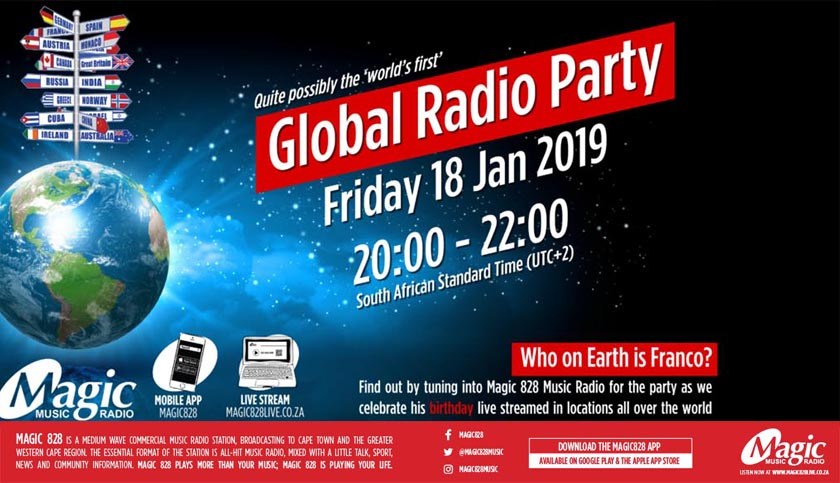 Ready to party? Magic Music Radio is about to kick some serious ass.
Turn on Friday 18 Jan to be part of a ‘world first’. The Magic will be heard in all four corners of the world for our Global Radio Party!
Our patron for the night is international business-man, Franco, who is celebrating his 50 birthday with an all-out global bash of note!
We’re starting the party early and ending it late. Turn on 7pm til Midnight, for the greatest party hits of all time!
Magic is part of the festivities, being streamed to Franco’s parties, businesses & friends. Perhaps never before has one radio station been streamed to a party happening all over the planet at the same time.
From South Africa to Kuwait, Sydney, across America, England and in Russia, as well as Lebanon, Spain, Croatia & more; we are going to blanket the world in Magic.

Magic Back To School Drive

WIN an escape to the Cape Winelands District

Water You Know with Cape Aqua

WIN an escape to the Cape Winelands District

Win a breakaway to Paarl by Finding Seano in the…

Find Seano in Paarl and you could win!

Off to Wellington we go. Find Seano, and you could…