It was late December back in ’63…. Just kidding!

It was towards the end of 2018 when Magic 828 was approached to host a one-off event like none other – a massive fan, based in Kuwait wanted to broadcast his 50th Birthday… to the world!

This was the beginning of a whirlwind journey which has ultimately seen Magic 828 earn a nomination for Radio Innovation at the SA Radio Awards 2020.

Soon after the initial phone call, we quickly discovered that our loyal listener has accumulated business connections on a truly global scale and has a vast number of friends around the world. With the proposal in place, we simply couldn’t refuse, and the world’s truly first global birthday party was born!

Using our streaming technologies, we took the party around the world and dedicated a 4-hour broadcast to one birthday boy, allowing party-goers to tune in from anywhere in the world and send well wishes and birthday messages. Unbeknown to the birthday boy, we reached out to his friends, family and business colleagues and had them send us birthday greetings via WhatApp: their name, country and a short message.

This was then produced, packaged and played back during the show. Social media was abuzz that evening with loads of Q/A. Our favourite went something like: “Who on earth is Franco? ”
To which another listener answered, “Who cares – I just want to know when is it is birthday again because this is awesome!” The unique broadcast was live and a resounding huge success!

The South African Radio Awards winners will be announced online on 17 April 2020. 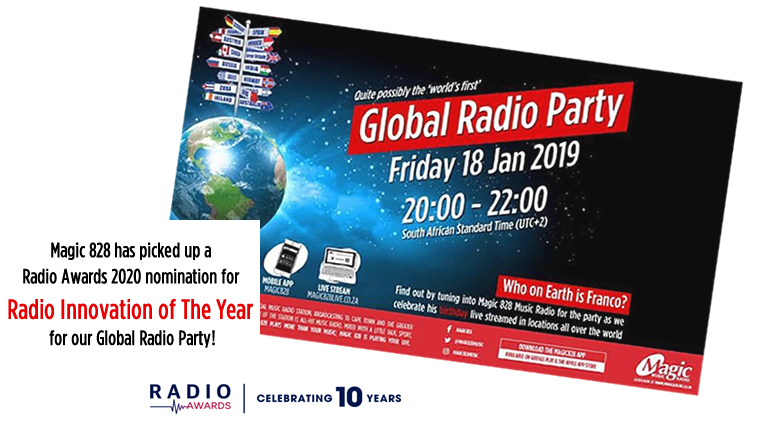 2 Macs and a Dram: Win with Seedlip