Woke up to the news that the UK’s Prime Minister, Boris Johnson is now in ICU? I hope he recovers fast, but it may also make some of the Brits take the virus a little more seriously. They were quite quick to jump on the bandwagon of social distancing from Europe a few years back so this should be easy for them. If you can step away from an entire continent, standing two meters apart in Tesco should be a doddle? 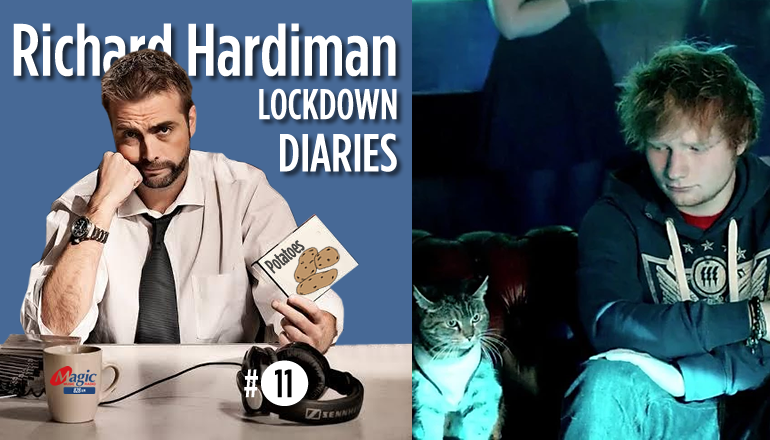 The new week has begun in earnest – isn’t it funny though that despite there being no real change in day to day living currently (same house, same people, same banana bread recipe), Mondays are still “Mondays”?

The Boomtown Rats asked “Tell me why I don’t like Mondays…” well I will tell you Bob Geldof, because they suck…and they are worse in lockdown; they act as reminder of a new week of no change ahead, a veritable living version of Talking Heads “Road to nowhere”… to continue the 80’s musical narrative.

I read that some prisons were now attempting to release inmates early due to COVID-19…which must be nice. The rest of us remain under lock and key with little to no human contact but Jonny Jailbreak can go home and be reunited with his “crew.”

Also read online that people are associating the virus to the new 5G rollout? What is being smoked out there? Trust me, if it was Cell C that was spreading the virus, we would have nothing to worry about! You can get nothing out of those guys and when you do it’s normally patchy to non-existent.

We watched “Contagion” on eTV last night (they are still going); haven’t seen it before but boy does it bring the virus impact back home! Although to be honest dear Diary I couldn’t get passed Kate Winslet’s character – I kept thinking if she was that worried about saving human life why did she let go of Jack and let him drown? Just asking?

Poppie doesn’t like me mentioning “Titanic”. We rented the DVD a few years back and I mentioned that the special effects were quite epic, especially when the boat sinks. He blames me to this day for spoiling the ending for him.

I woke up in the middle of the night and could not go back to sleep; scrolled through Instagram but to be honest there are only so many online yoga selfies and banana bread “results” one can handle…I mean I am hashtag-blessed you feel the need to share but some of us should not be wearing lycra, Susan, or using the “X-pro II” filter on your burnt baking efforts! Stop it.

And how many people are “going live” on the “Gram” lately? It’s like suddenly everyone is a self-help guru, or an award-winning CNN journalist; “now we cross to Karen in Karen’s kitchen for the latest happenings in Karen’s home…” I know I am coming across as bitter dear Diary but if this is the end of the world as we know it, I was hoping for more than a heavily filtered baking pic and yet another “The Kiffness” parody song on Facebook.

I could not get back to sleep so I decided to take all matters vodka into my own hands; I pulled on a jersey and headed to the shed. I spent an hour peeling the remaining potatoes (forgot a knife so I had used the garden shears which is not as easy as I had hoped). Once that was done, I repeated the recipe that Poppie started but this time no medication or alcohol was consumed.

By 3am I had a good mash going; still not sure we are getting the temperature right, but everything “looked” like it was going to plan this time – I finished up and let the mash settle and headed back to the house quite proud of myself! It may not be banana bread, Karen, but the potato vodka is a go!

On the way back to the house I noticed the light in the granny flat was on which was odd; pretty sure it was off when I went out? Must remember to get the keys in the morning and turn it off and check if it’s faulty.

I snuck back into the house and finally managed to get to sleep, only to be woken an hour later by what could only be Raymond howling somewhere off in the distance! This cat is haunting me – why does it not just go home and irritate the life out of Mrs. B instead!

Reluctantly I got up and put a plate of food outside just him in case he was hungry; I hate the moaning ginger lump of fur, but I can’t have it suffering; oddly this is also how I feel about Ed Sheeran.

Showered and shaved this morning; felt very fresh and no longer like a cast member of Walking Dead – it was quite exhilarating; I thought about even turning my camera back on in the next Zoom meeting…maybe put on a shirt, I thought…the work is full of wonderous possibilities! Then I remembered the lockdown…back to tracksuit pants and yesterdays t-shirt then.

When I mentioned the light was on in the granny flat last night and I should take a look, my wife immediately said leave it to her…she needed a walk anyways and will check it. To be honest calling it “a walk” is a bit ambitious of her, it’s 3 meters at best, but whatever, one less job for me.

In a world of negative there was some positive in our “fake” contagion situation.

I can finally halt the pretense of Poppies “illness” and he has been be allowed back into general population (our house only of course) once more.

Poppie has been given “the all clear” …by me.

In a very loud but fictitious phone call to the “Doctor” I thanked him for clarifying the issues and his attentiveness to Poppies’ needs, and that the wife would be very happy to know that it was probably just a case of his allergies playing up. I may have been a little too convincing as the wife asked me to ask him how he was doing in this crisis. “Very well…muddling through” I relayed to her.

Wife: “Ask him how his family is?”

Me: “They are well”, I said “although his wife is a bit under the weather.”

Wife: “Under the weather? She died last June?”

Me (recovering slightly): “Sorry, I misheard him…he says, ‘she’s about 6-feet under the heather’.”

I quickly made a point of saying “Hello? Hello?” a number of times into my cell phone and then mumbled that the call had dropped and “it goes to show you just how crap Cell C really are”.

I left the room in haste. I think I got away with it.